← more from
Sub Pop
Get fresh music recommendations delivered to your inbox every Friday.
We've updated our Terms of Use. You can review the changes here.

No Cities To Love 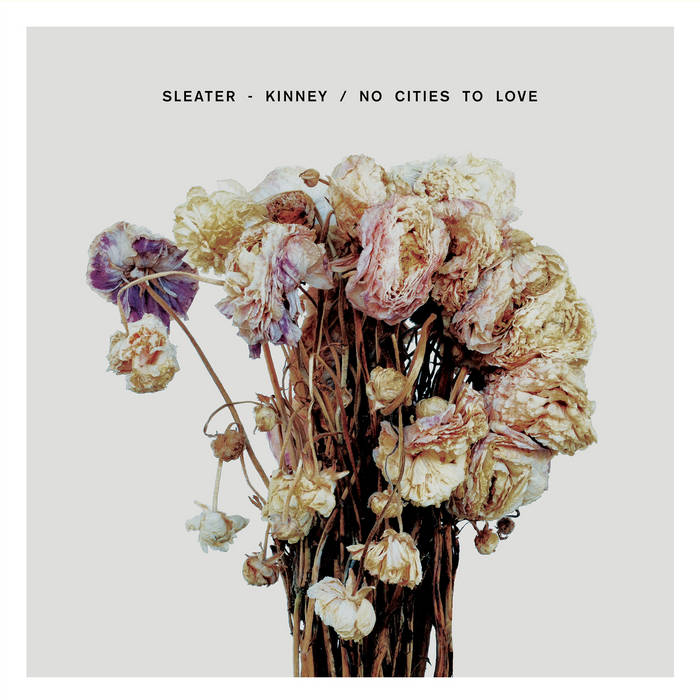 drpottsiv I do love A New Wave, it's got an uplifting sound and is so much fun to sing to.

But my favorite is still the opening track, Price Tag. It rocks hard, the riffs and drums are fun and Corin's voice is so powerful, I love it so much! Favorite track: A New Wave.

pushtree It's the grrls. What else can I say. Favorite track: Surface Envy.

hilltop I love sleather Kinney and while this album has gotten rave reviews for 2015 its not at the top of my lists, but still a great comeback album.
more...

The dude formally known as Albeezy

“We sound possessed on these songs,” says guitarist/vocalist Carrie Brownstein about Sleater-Kinney’s eighth studio album, No Cities to Love. “Willing it all–the entire weight of the band and what it means to us–back into existence.”

The new record is the first in 10 years from the acclaimed trio–Brownstein, vocalist/guitarist Corin Tucker, and drummer Janet Weiss–who came crashing out of the ’90s Pacific Northwest riot grrrl scene, setting a new bar for punk’s political insight and emotional impact. Formed in Olympia, WA in 1994, Sleater-Kinney were hailed as “America’s best rock band” by Greil Marcus in Time Magazine, and put out seven searing albums in 10 years before going on indefinite hiatus in 2006.

But the new album isn’t about reminiscing, it’s about reinvention–the ignition of an unparalleled chemistry to create new sounds and tell new stories. “I always considered Corin and Carrie to be musical soulmates in the tradition of the greats,” says Weiss, whose drums fuel the fire of Tucker and Brownstein’s vocal and guitar interplay. “Something about taking a break brought them closer, desperate to reach together again for their true expression.” The result is a record that grapples with love, power and redemption without restraint. “The three of us want the same thing,” says Weiss. “We want the songs to be daunting.”

Produced by long-time Sleater-Kinney collaborator John Goodmanson, who helmed many of the band’s earlier albums including 1997 breakout set Dig Me Out, No Cities to Love is indeed formidable from the first beat. Lead track “Price Tag” is a pounding anthem about greed and the human cost of capitalism, establishing both the album’s melodic drive and its themes of power and powerlessness–giving voice, as Tucker says, to those who “struggle to be heard against the dominant culture or status quo.”

“Bury Our Friends” has Tucker and Brownstein joining vocal forces, locking arms to defeat a pressing fear of insignificance. It’s also emblematic of the band’s give and take, and commitment to working and reworking each song until it’s as strong as it can be. “‘Bury Our Friends’ was written in the 11th hour,” says Tucker. “Carrie had her great chime-y guitar riff, but we had gone around in circles with how to make that part into a cohesive song. I think Carrie finally cracked the chorus idea and yelled, ‘Sing with me!’” “A New Wave” similarly went through many iterations during the writing process, with five or six potential choruses, before crystallizing. It enters with an insistent guitar riff, and a battle between acceptance and defiance–“Every day I throw a little party,” howls Brownstein, “but a fit would be more fitting.”

The album’s meditative title track was inspired by the trend of atomic tourism and its function as a metaphor for someone enthralled and impressed by power. “That form of power, that presence, is not only destructive it’s also hollowed-out, past its prime,” says Brownstein. “The character in that song has made a ritual out of seeking structures and people in which to find strength, yet they keep coming up empty.”

Sleater-Kinney’s decade apart made room for family and other fruitful collaborations, as well as an understanding of what the band’s singular chemistry demands. “Creativity is about where you want your blood to flow, because in order to do something meaningful and powerful there has to be life inside of it,” says Brownstein. “Sleater-Kinney isn’t something you can do half-assed or half-heartedly. We have to really want it. This band requires a certain desperation, a direness. We have to be willing to push because the entity that is this band will push right back.”

“The core of this record is our relationship to each other, to the music, and how all of us still felt strongly enough about those to sweat it out in the basement and to try and reinvent our band,” adds Tucker. With No Cities to Love, “we went for the jugular.”

Bandcamp Daily  your guide to the world of Bandcamp

Guests John Beltran and Kim Myhr walk us through their magical musical adventures.